In the first of our ‘What Brands Can Learn from People Who…’ series, BMB head of strategy Mel Arrow considers the “performative polarisation” around certain everyday topics of conversation. 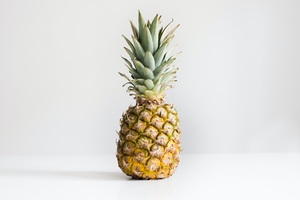 Mask on, mask off. Remain, leave. Polarisation is a central tenet of today’s politicised society. But this article isn’t about politics. No no. It’s not about the kind of polarisation we read about on front pages, that shapes society in big and meaningful ways. Oh no no no. It’s about a specific genre of polarisation that’s discussed passionately every single day, across every corner of the internet, even though the people involved in it don’t actually care all that much about it. These are low stakes disagreements that everyone can get involved in. What The Economist calls ‘performative polarisation’. Arguments for the sake of arguments. Arguments because you happen to have the platform, time and inclination. And the queen of all performative polarisation debates? The longstanding argument about the merits of putting pineapple on pizza.

Pizza has become something you can profess to care about very strongly, without really caring at all. 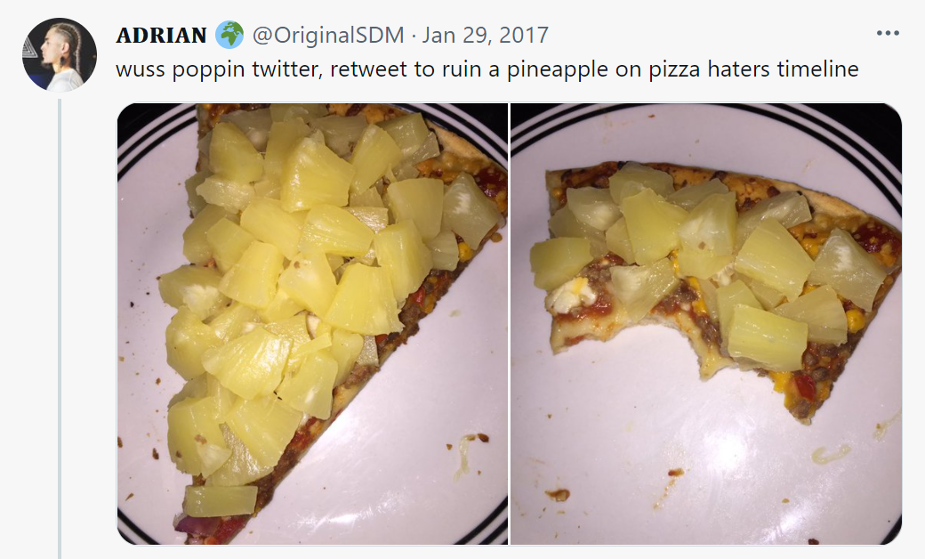 Hawaiian pizza was invented in 1962, but over fifty years later, the debate about its legitimacy rages. The first known internet thread on the topic was posted in 2009, since then, the topic has spawned memes galore (think Saltbae sprinkling pineapple on pizza) reaching a peak in 2017 (although no one really knows why) and still bubbling away in culture today. You’ll find pineapple on pizza jokes in Disney films, comedy sketches, even being used by the US Department of Homeland Security as an illustrative example of a divisive topic foreign threats can use to spread dissent in America (weird but true, have a look). It’s also become a topic tracked by polling companies like YouGov, who can tell us that 53% of Brits approve of pineapple on pizza, which is only slightly more than who voted for Brexit. Coincidence? I think not. 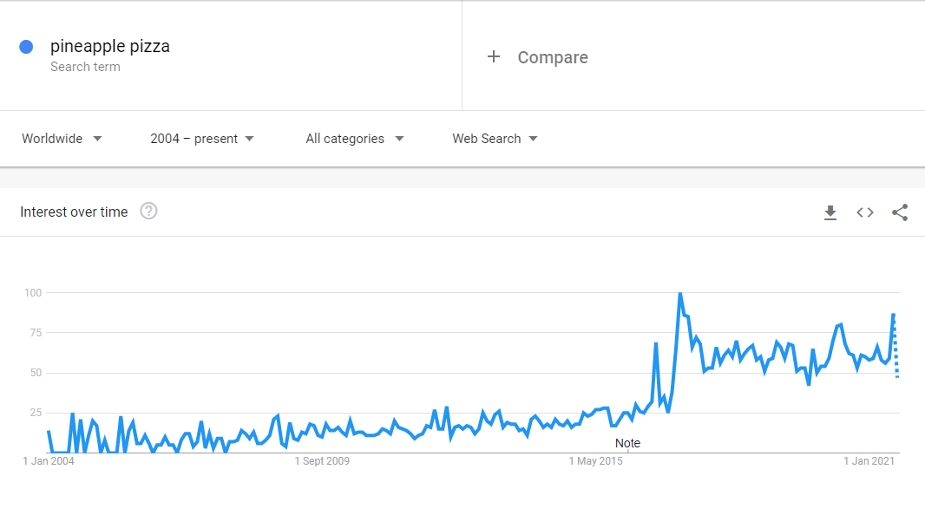 But as tempting as it is to go down a fruit-based rabbit hole, the point is not pineapple on pizza. The point is that it’s a fascinating, modern, social media-fuelled phenomenon that people love to engage in these completely inconsequential debates. To come up with new ways to persuade the other side that they’re wrong. To employ every tactic from humour to science to expert opinion. No one really cares all that strongly about it, no one is turning up to an anti-pineapple on pizza rally (although I wouldn’t want to test that theory), and yet we simply love to perform the debate.

And pineapple on pizza is not the only topic that gets this treatment. Take Crocs. “Loved and loathed in equal measure” says The Economist, Crocs reported a 64% increase in revenue at the start of 2021, spurred on by comfort-seeking during the pandemic and the plastic shoe’s unlikely appearance on catwalks and red carpets. And yet, Victoria Beckham said she’d “rather die” than wear a pair of Crocs that Justin Beiber gave her. Now, on the face of it, this is a little extreme, but when judged against the usual tone of performative polarisation, it’s totally sane and normal. Eurovision is another source of performative polarisation. The blue and black vs white and beige dress is another. The perfect pantone colour of tea and toast is another. Like sarcastic hydras fed only on subreddits, they seem to spawn new heads every year.

So, how is any of this useful to brands? Because performative polarisation debates are nothing short of masterclasses in persuasion. Which is particularly pertinent for today’s brands, who appear to be shying ever-further from this kind of strategy. Advertising used to be ‘the art of persuasion’, but now, if this year’s Cannes Lions awards and every commercial break is anything to go by, it’s more about ‘the art of purpose’ or ‘the art of reflecting a cool lifestyle’ (admittedly not all that catchy). At a recent BMB Agency event discussing ‘why brands have become persuasion shy’, Trevor Beattie, BMB founder and executive producer, said “Brands are spending a lot of time saying ‘we get you’, what they’re failing to add is, ‘and this is why you should get us.’” Performative polarisation debates should, first and foremost, reassure brands: your customers are persuading each other all the time, so why shouldn’t you engage in a persuasion too?

Secondly, brands should see these debates as an opportunity to learn, emulate and out right steal persuasion tactics. Performative polarisation can give us styles, approaches and even language that brands can replicate to win over their customers. You’ve hit the jackpot in terms of learning if you’re one of the brands being discussed. CMO of Crocs? You have a wealth of insight at your fingertips. You know who loves you and why, who hates you and why and you can use it all to your advantage. But just because your brand isn’t one of the ones being discussed, it doesn’t mean you can’t use the zeitgeist to your advantage. Stage it. Stop recruiting only your target audience to focus groups and start recruiting loyalists and detractors into the same group instead. Have them openly debate your merits. Create your own closed performative polarisation debate. Note the tactics they use, the USPs they call upon, the facts they remember, the myths they propagate.

So, I think the answer is pretty clear. What can brands learn from people who put pineapple on their pizza? How to persuade like an internet assassin.