Electric light wasn’t really invented ‘til the 1870s – kind of a long time ago, but in the 200,000-year grand scheme of human life, not that long ago. But once it was widely used, especially industrially, it basically changed everything. The mass production of the world started to phase out our distinction between day and night. Work and mass consumption gave us plenty to do at all hours and then holy heck, along came the WWW. Emails, chat rooms, clients calling in from different time zones. Then the Wikipedia black holes, the Facebook stalking seshes, and the 3-seasons-1-weekend binges, and now no one knows the meaning of sleep.

That current non-stop human condition was the premise for Somerset House’s exhibition, 24/7.

The exhibition started by blinding you with a grid of flashing lights, crackling noisily as one faded and another sparked, titled ‘A Planned Torture’ (it was), followed by a film of an artist sleeping with a drone flying 30cm over his head. Both represented to me the feeling of insomnia, constant loops of stimulation in your brain that won’t shut up. Can’t sleep, worry about not sleeping, can’t sleep more, look at the clock, fewer minutes until your alarm, worry, don’t sleep… ad infinitum. So, 3 minutes into the exhibition and I felt anxious and a little headachey.

As the space wound round, there were photographs (including the funky time-lapse tower block on the cover of the Streets’ album Original Pirate Material. The lights that shine the brightest were the ones that stayed on the longest through the night), paintings and films, as well as a glass box display of smartwatches. It was the kind of exhibition that got better as you made your way through it and each piece began to give the others context. One artwork on its own was fine, but the collection of them all, each critiquing our relationship to work, play, sleep, our phones, etc. held up one big mirror to the current state of society that made you feel seen and a bit worried.

Upstairs there was more insightful stuff. A ‘teahouse’ you could climb into, except it was full of digital numbers constantly counting down: you drink time instead of tea.

Do we measure time in digits or moments? 15 hands cast in plaster, poised mid text, thumbs out but no phone. The sculpture was called ‘15 pairs of mouths’, and it asked what it means to speak in a world where so much of our communication is done with one tapping thumb.

A group favourite was a documentary-style film in a WeWork type office that had hired a professional to provide ‘touching services’ to its employees. Absurd, a little creepy, and quite funny, but it did make you wonder why we, the working British public, find a pat on the shoulder so disconcerting – we spend a huge number of hours with the people in our office, sometimes more than we see our friends and families, and yet we feel disconnected.

More disturbing critiques of our working lives included Fitbits attached to metronomes so you could fake steps at your office to get a better health insurance premium, and prints of a man trying to sleep at his desk in Beijing, an illusion of movement that felt like you were catching his few minutes of sleep between work.

One of the last artworks was a big flag printed from the data of workplace timesheets, that spelt out “8 HOURS LABOUR, 8 HOURS RECREATION, 8 HOURS REST.” It made me think… are those divisions true in my life? Or anyone’s? 8 hours a day of fun?! Of sleep!? I think a lot of people feel like it’s 16 of one, 8 of another, and one’s got to go. Maybe the answer is to make work feel more like play and to make sleep feel as important as work. Then, perhaps, we won’t all break down in an anxious robotic heap, which felt a little like what this exhibition was warning me against. I was glad that the final installation of the exhibition was a gorgeous, meditative, anxiety-reducing experience that quieted my mind and vibrated my bum to the tune of Leonard Cohen’s hallelujah. I’m not sure what it had to do with anything, but it was fantastic. 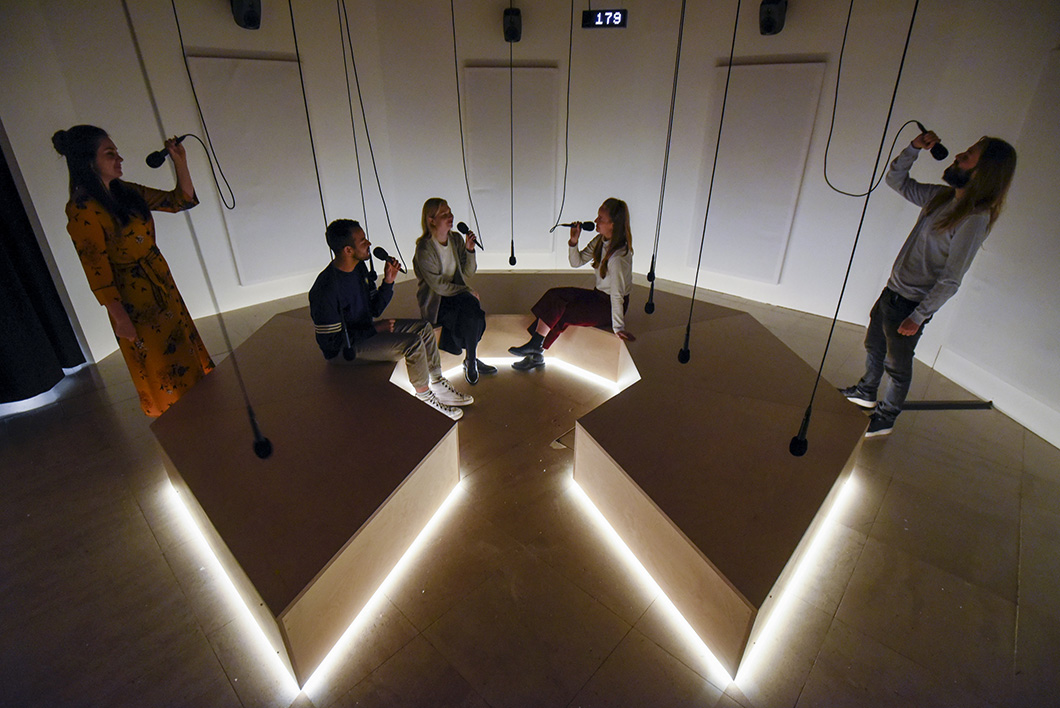 All in all, 24/7 did exactly what its strapline promised: a wake-up call for our non-stop world. On the walk back to the office, phones stayed firmly in pockets and an effort was made not to rush. I’m not sure any of us are going to change our habits long term but it certainly woke me up and I can definitely recommend a visit.

24/7 at Somerset House is showing until the 23rd of February.